Office Move!   We have vacated the space at 684 W. Boughton – our new office is still under construction but eventually we will be moving into space at 107 W. Boughton.  Our New landlord is our friend Joe Giamanco  and our costs for this office are dramatically reduced. ( Three cheers for Joe! ) .  The place is still under construction, and there is a global pandemic going on – So watch your email, etc for a Grand Opening party and a big kickoff for the GOTV push for November.

Projections for USA and by state:   https://covid19.healthdata.org/projections

Illinois Senate District 49 runs north to Boughton Road, cutting to the west near Oswego, then south to Shorewood, and back up near Weber Road to the east.  Bolingbrook resident Michael Crowner is running in the Democratic Primary to serve that district.

Michael’s career is in financial services, where he consults with small businesses, groups, and individuals.  His goal has been toward building futures with positive impact on local communities and the people whose lives are built there.  Executives and entrepreneurs have relied on him to help to solve their most difficult challenges, drive strategy, unlock company value, and create jobs throughout the area. He has worked with legislative and community leaders to share his understanding of finance, small business, diversity, real estate, pensions, investments, and community development.

Michael, Melanie, and daughter Jada live in Bolingbrook. He is a graduate of Plainfield High School Central Campus, Northwestern University, and the Kellogg School of Management. In his free time, he enjoys spending time with his family, coaching his daughter’s sports teams, playing basketball, and cheering on the Northwestern Wildcats.

As senator, Michael will be working toward the elimination of government corruption and the creation of good-paying jobs.  To get there, he will rely on his diverse experience and education to find solutions to our community’s most pressing problems:  rising healthcare costs, the property tax burden, and the high cost of higher education. His public-service goal parallels his professional goal: to build positive futures together.

Nick grew up in a working-class home in Joliet. Both of his parents
were union teachers in the Joliet public schools. They instilled in
him the importance of hard work, saving, serving your community, and
being dedicated to your family.

In his fifteen years as Chief of Staff for Will County Executive Larry
Walsh, Nick saw how these core values can be put to work by county
leadership. Nick is committed to continuing to build Will County for
working families.

Nick has worked across the aisle for fifteen years to solve our
county’s most difficult issues. His priorities include maintaining the
county’s fiscally responsible foundation while modernizing our
infrastructure and implementing a long-term sustainability plan.

Nick, his wife Laura, their four children, and their rescue dog,
Apollo, live in Bolingbrook.

If you or someone you know was considering being an Elected PC in 2020, but the paperwork was not filed, don’t fret, there is still one more chance to get Elected as a Write-In Candidate.

Step 1 – Download the Declaration of Intent to Be a Write-In Candidate
https://www.thewillcountyclerk.com/elections/elections/candidate-services-2/write-in-candidate-procedures/

Step 2 – Fill Out and then Notarize Declaration of Intent (see example below, don’t sign until in front of the Notary)

Step 4 – When canvassing your precinct for the 2020 Primary, include your information to be written-in for PC

***We can help with any/all steps, reach out to chair@dupagetownshipdemocrats.com 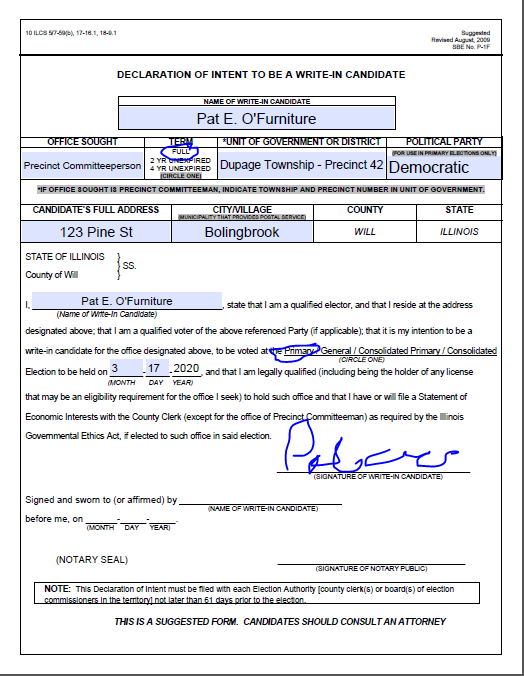 Congressman Bill Foster is a scientist and businessman currently representing the Illinois’ 11th Congressional District.  Previously, he served in Congress from March 2008 until January 2011 as the Representative of 14th District.  He is the only PhD physicist in Congress.

Bill serves on the House Committee on Financial Services, a position he also held in the 110th, 111th, 113th, 114th, and 115th Congresses. On the Financial Services Committee, he advocates for consumer protection and a fair economy for everyone.  In response to the Great Recession, he helped develop several important reforms in the financial services and housing sectors, most notably the Dodd-Frank Wall Street Reform and Consumer Protection Act.  In addition, Bill serves as chairman of the Financial Services Committee’s Task Force on Artificial Intelligence.

Bill also is a member of the Science, Space, and Technology Committee, where he has fought for evidence-based policies and forward-thinking approaches to some of our most pressing issues, including climate change and energy innovation.  He also continues to champion sustained federal funding for scientific research.

Bill’s business career began at age 19 when he and his younger brother co-founded Electronic Theatre Controls, Inc., a company that now manufactures over half of the theater lighting equipment in the United States.

Before he became a Member of Congress, Bill worked for over 20 years as a high-energy physicist and particle accelerator designer at Fermi National Accelerator Laboratory (Fermilab). He was a member of the team that discovered the top quark, the heaviest known form of matter. He also led the teams that designed and built several scientific facilities and detectors still in use today, including the Recycler Ring, which is the latest of Fermilab’s giant particle accelerators.

Bill lives in Naperville with his wife Aesook, who is also a physicist. Bill has two grown children, Billy and Christine. Bill’s father was a civil rights lawyer who wrote much of the enforcement language behind the Civil Rights Act of 1964.  His experience in business, science, and public service gives him a unique perspective on issues facing residents of the 11th congressional district.

Meg Loughran Cappel has deep family roots in Will County.   She has lived here since the age of five. Her grandfather, Francis J. Loughran, was a respected trial attorney and advocate for those in and around Will County. Meg was inspired by her grandfather’s legacy and became a special-education teacher, providing a voice for students with special needs. She has long been dedicated to inclusive environments for students to learn and thrive.

A natural communicator, Meg took her passion for education to the next level.  She became a union representative at her school for two years, then ran for, and won, a seat on the Joliet Township High School Board.  For the last 12 years, Meg has been a champion for equity in education for both teachers and students, offering them support from birth through higher education, and on to meaningful careers.

Growing up in Will county and benefitting from all it has to offer, Meg has been passionate about giving back to her community. She has been a volunteer in her community throughout her life: serving and leading ministries at her church; leading various parent/faculty groups for her children; serving as a 4th and 5th grade cheer coach at Sator Sanchez Elementary School in Joliet; and serving as a member of the Shorewood Chamber of Commerce. In addition to her membership on the JTHS Board, Meg is an Illinois Association of School Board Delegate, a member of the JTHS Discipline committee, and a member of the Joliet Township High School Foundation Board.

A mother of three and caregiver to her elderly father, Meg understands that many Illinoisans live paycheck to paycheck. Meg and her husband, Jason, recently opened a small business to help put her children through college, and she knows that many other families face the same financial challenges posed by higher education and rising healthcare costs. Meg will take action to support working families and small businesses, while also addressing the need for access to quality, affordable healthcare.

Meg recognizes the need for ethical leadership in Springfield. Her own leadership, advocacy and passion have been demonstrated throughout her career, and will continue as she uses her voice in Springfield for the 49th district.

Map to Our Office